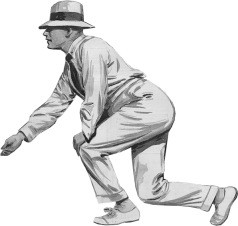 We celebrate 90 years of bowling in Swanage this year and have played a game against Council members, just as happened on the opening day in 1928.

The club was formed in the spring of 1928 and called “The Swanage & District Bowling Club” with a membership fee of 15 shillings. Here are a few extracts from the original handwritten minutes:

“A public meeting was held at the Town Hall on Feb 21st 1928 to discuss proposals with a view to forming a Bowling Club for the Town of Swanage.”

“A sub-committee met with Council representatives on Thursday March 15th 1928 when our recommendations were accepted, with the proviso that the Club must guarantee 50 members, or the equivalent cash value.”

“A general meeting for the inauguration of a Bowling Club for Swanage & District was held in the Town Hall on April 3rd 1928.”

The first official opening match was held on May 3rd 1928 at 5.30pm against Council officers.

The question of admitting ladies to the club was discussed very early on and although a decision on this was deferred for 12 months it took several years before ladies could become members.

The Bowling Green was originally located on the hill behind the seafront and not far from the current bandstand. Then in 1978 the bowling green was “moved” by the council to Beach Gardens where a new green was constructed together with a clubhouse/pavilion which is shared with the Swanage Tennis Club.

From 1978 until 2010 the club facilities at Beach Gardens were less than ideal as, for example, there was no bar – which discouraged touring teams to visit – and the kitchen was very narrow making catering difficult. The club house was also cluttered with all the rink playing apparatus as no provision had been made for the storage of this gear outside. So the club began a process of improving and updating all of its facilities:

• A bar was added in 2010
• A shed for the storage of all the rink equipment was built during the Winter 2010/2011
• The kitchen was widened and updated in 2011
• A large canopy and deck was erected over the outside terrace area in 2014 to provide a pleasant seating area giving protection from both the sun and rain.

In 2016 the Club developed its own Facebook page where we post not only Club events, but information about the world of Bowls.

In March 2017 we were proud to welcome our very own website, which we hope you enjoy and find useful.