This was a first time WIN for Swanage in the first round of the national men’s ‘TOP CLUB’ competition.

Clive raced away in his game, after 6 ends he was 8-0 up, in the 7th he gave 1 away but then continued on the rampage to go 14-1 up after 11 ends. The opposition pinched one on the 12 but after 15 ends Clive was unable to be beaten at 16 shots to 3 up so he won with 6 ends not needed to be bowled! (Opponent could only score a maximum of 12 shots)

Brian on the other hand had a ‘nip and tuck’ game. After 4 ends he was 3-5 down but ‘stuck in’ a four to go 7-5 up after 5, his opponent then took charge and went 10-7 up after 8. Brian, being the fighter he is, came back and matched the opposition when he took control after 17 ends was 17-14 up after the next three ends he was at the prescribed 21 shots up!

Unfortunately, we lost in the triples and fours, so that is all we will report on those two rinks.

We, therefore, WON the match 3 disciplines to 2.

Our next opponent will be either Blandford or Shaftsbury, yet to play.

Hello. My name is Tim Spencer, the Managing Director of Optimus Mortgages Ltd.

I am originally from Dorset, and I spent many happy years living in Swanage, where my parents still live. I started working in the Financial Services industry in the 1990s and I have a wealth of experience in helping clients work towards financial freedom. I set up Optimus Mortgages Ltd in 2016 as I am passionate about helping people understand the regulated financial products that are currently available. I specialise in later life financial solutions for clients who are looking to make use of the equity within their property, but I also help clients with their residential mortgage and buy to let mortgage needs.

Optimus Mortgages Ltd is an independent later life financial solutions and mortgage advice specialist firm based in County Durham. I moved here in 2021 from Dorset, but still regularly visit Dorset to see friends and family.

With over two decades of experience in financial services, I deliver bespoke guidance and advice to my clients, and make use of the latest technology to deliver a premium level of service, whilst keeping things simple and straight-forward.

At Optimus Mortgages, financial solutions are made simple. You can be safe in the knowledge that you will always be dealt with by fully qualified specialists who make sure that everything is clear and free from jargon.

There are many stigmas attached to Equity Release, and I have heard my fair share of horror stories from the past, but I am here to allay any concerns and bring you the latest information on products which I trust.​

I like to sleep at night knowing my clients are happy, so here are my promises to you:​

​To arrange your consultation, call us on 03330 067783, or email email hidden; JavaScript is required

April 14th sees the President’s Coffee Morning. Mike Keats is looking forward to welcoming new and longer standing members to meet up between 10 and 12 to start his year of fundraising for Cancer Research.

The Club’s opening game of the season takes place on 19th April at 2pm, followed by fish and chips.

My introduction to bowling was in 2010 when I accompanied my partner to an Open Day.  It was going to be a retirement hobby for him but I was encouraged to ‘have a go’.  The rest is history – I was hooked!  Bowling is a great sport for everyone – singles, couples, any gender, young or old can all take part at any level – and its a good way of making new friends.

Hopefully covid is now going to allow us to get back to ‘normal’ and, as this year’s Ladies Captain, I look forward to building on last year’s success with existing ladies and to meeting new bowlers – there’s plenty of opportunity to take part in games and to progress.

Hi
My name is Tony Bell and I have been bowling at Swanage Bowling Club
for six years. I am very proud to be elected as men’s captain for 2022.
I look forward to the challenges ahead now we are hopefully back to a
normal bowling season and am also keen to welcome new bowlers.

Sid and Joy Steele have encouraged and developed youth bowls in Dorset for over 10 years. The Academy plays Swanage Bowls Club every year and regularly wins the trophy. They are an inspiring bunch led by an inspiring couple.

Following the recent AGM confirmation of the Committee for 2022 can be found on the updated Contacts page.

Our team played brilliantly throughout the season, waiting with bated breath for the results on the final day of the season. In the end we finished second on the basis of rinks won, having achieved the same points as Ferndown A. Great achievement in the top Division and well done to everyone who played during the season. 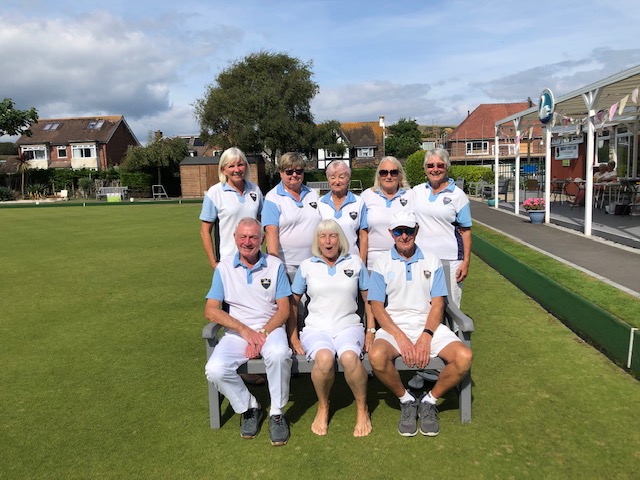 Some of the players in the Mixed Triples team

The weather was good to us dry all weekend, Saturday somewhat cloudy and windy but Sunday was ‘wall to wall’ sunshine. The bowling was as good and the green running true.

On Saturday we had Three singles finals go to 20 all, very exciting. The winners and runners-up are listed below:

We use some harmless cookies to count visitors, and to give you the best experience on our website.

This website uses cookies to improve your experience while you navigate through the website. Out of these, the cookies that are categorized as necessary are stored on your browser as they are essential for the working of basic functionalities of the website. We also use third-party cookies that help us analyze and understand how you use this website. These cookies will be stored in your browser only with your consent. You also have the option to opt-out of these cookies. But opting out of some of these cookies may affect your browsing experience.
Necessary Always Enabled
Necessary cookies are absolutely essential for the website to function properly. These cookies ensure basic functionalities and security features of the website, anonymously.
Functional
Functional cookies help to perform certain functionalities like sharing the content of the website on social media platforms, collect feedbacks, and other third-party features.
Performance
Performance cookies are used to understand and analyze the key performance indexes of the website which helps in delivering a better user experience for the visitors.
Analytics
Analytical cookies are used to understand how visitors interact with the website. These cookies help provide information on metrics the number of visitors, bounce rate, traffic source, etc.
Advertisement
Advertisement cookies are used to provide visitors with relevant ads and marketing campaigns. These cookies track visitors across websites and collect information to provide customized ads.
Others
Other uncategorized cookies are those that are being analyzed and have not been classified into a category as yet.
SAVE & ACCEPT